My Journey to the Himalayas


This quarter I was featured in Yoga Therapy Ireland’s Winter Magazine with an article on my trip to India! Maureen and her team put great effort into compiling the magazine for the membership of Yoga Therapy Ireland, so I was delighted to be included. 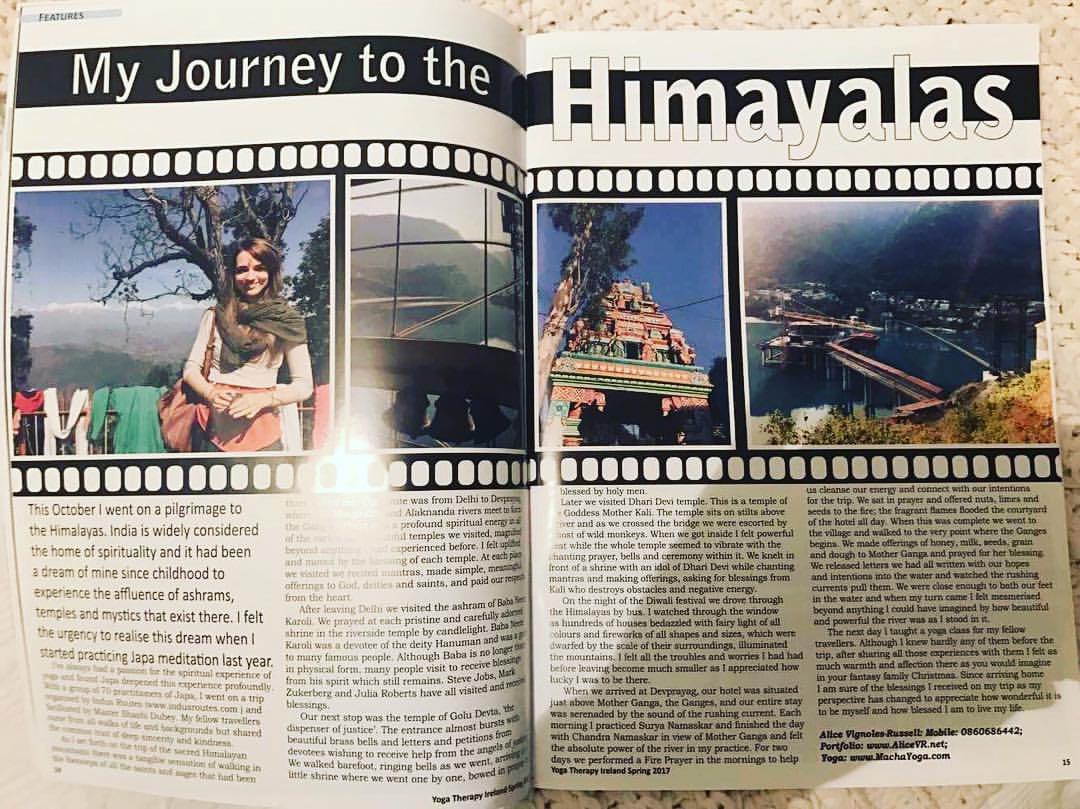 This October I went on a pilgrimage to the Himalayas. India is widely considered the home of spirituality and it had been a dream of mine since childhood to experience the affluence of ashrams, temples and mystics that exist there. I felt the urgency to realise this dream when I started practicing Japa meditation last year. I’ve always had a passion for the spiritual experience of yoga and found Japa deepened this experience profoundly. With a group of 70 practitioners of Japa meditation. My fellow travellers came from all walks of life and backgrounds but shared the common trait of deep sincerity and kindness.
As I set forth on the trip of the sacred Himalayan mountains there was a tangible sensation of walking in the footsteps of all the saints and sages that been there before me. Our route was from Delhi, via Ranikhet to Devprayag – where the Bhagirathi and Alaknanda rivers meet to form the Ganges. There was a profound spiritual energy in all of the varied and beautiful temples we visited, magnified beyond anything I had experienced before. I felt uplifted and moved by the blessing of each temple. At each place we visited we recited mantras, made simple, meaningful offerings to God, deities and saints, and paid our respects from the heart.
After leaving Delhi we visited the ashram of Baba Neem Karoli. We prayed at each pristine and carefully adorned shrine in the riverside temple by candlelight. Baba Neem Karoli was a devotee of the deity Hanuman and was a guru to many famous people. Although Baba is no longer there in physical form, many people visit to receive blessings from his spirit which still remains. Steve Jobs, Mark Zukerberg and Julia Roberts have all visited and received blessings.
Our next stop was the temple of Golu Devta, ‘the dispenser of justice’. The entrance almost bursts with beautiful brass bells and letters and petitions from devotees wishing to receive help from the angels of justice. We walked barefoot, ringing bells as we went, arriving at a little shrine where we went one by one, bowed in prayer to be blessed by holy men.
Later we visited Dhari Devi temple. This is a temple of the Goddess Mother Kali. The temple sits on stilts above a river and as we crossed the bridge we were escorted by a host of wild monkeys. When we got inside I felt powerful heat while the whole temple seemed to vibrate with the chanting prayer, bells and ceremony within it. We knelt in front of a shrine with an idol of Dhari Devi while chanting mantras and making offerings, asking for blessings from Kali who destroys obstacles and negative energy.
On the night of the Diwali festival we drove through the Himalayas by bus. I watched through the window as hundreds of houses bedazzled with fairy light of all colours and fireworks of all shapes and sizes, which were dwarfed by the scale of their surroundings, illuminated the mountains. I felt all the troubles and worries I had had before leaving become much smaller as I appreciated how lucky I was to be there.
When we arrived at Devprayag, our hotel was situated just above Mother Ganga, the Ganges, our entire stay was serenaded by the sound of the rushing current. Each morning I practiced Surya Namaskar and finished the day with Chandra Namaskar in view of Mother Ganga and felt the absolute power of the river in my practice. For two days we performed a Fire Prayer in the mornings to help us cleanse our energy and connect with our intentions for the trip. We sat in prayer and offered nuts, limes and seeds to the fire, the fragrant flames flooded the courtyard of the hotel all day. When this was complete we went to the village and walked to the very point where the Ganges begins. We made offerings of honey, milk, seeds, grain and dough to Mother Ganga and prayed for her blessing. We released letters we had all written with our hopes and intentions into the water and watched the rushing currents pull them. We were close enough to bath our feet in the water and when my turn came I felt mesmerised beyond anything I could have imagined by how beautiful and powerful the river was as I stood in it.
The next day I taught a yoga class for my fellow travellers. Although I knew hardly any of them before the trip, after sharing all those experiences with them I felt as much warmth and affection there as you would imagine in your fantasy family Christmas. Since arriving home I am sure of the blessings I received on my trip as my perspective has changed to appreciate how wonderful it is to be myself and how blessed I am to live my life.

Manage Cookie Consent
To provide the best experiences, we use technologies like cookies to store and/or access device information. Consenting to these technologies will allow us to process data such as browsing behavior or unique IDs on this site. Not consenting or withdrawing consent, may adversely affect certain features and functions.
Manage options Manage services Manage vendors Read more about these purposes
View preferences
{title} {title} {title}